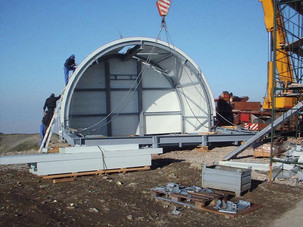 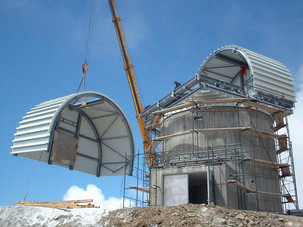 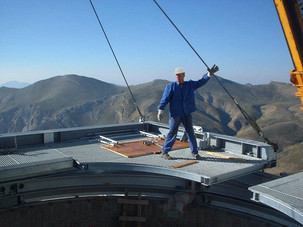 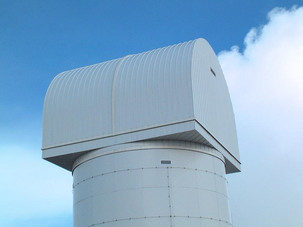 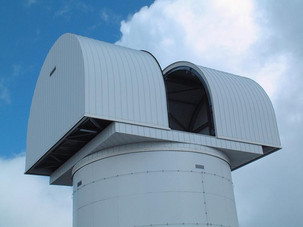 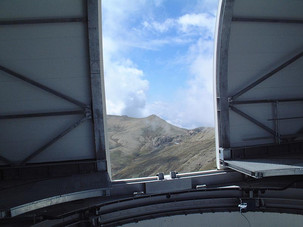 Hot-dip galvanised view of the stars: In summer, the Chelmos observatory that belongs to the Greek National Observatory was erected in the mountains of Greece.

This involves an enclosure, which is to house the second largest (built by the company Carl-Zeiss) reflecting telescope on mainland Europe. The precise location is the 2,341 m high Chelmos mountain in Greece. The dome, with 9 m long sides and standing 8 m high, is made from a heavy 30 ton steel structure, hot-dip galvanised by WIEGEL. Its shape in the form of a half cylinder is innovative. The reason for this is the arrangement of trolley carrier in the apex, which is required for the disassembly and the periodically necessary transport of the mirror to a loading device in the tower.

The steel structure of the dome, along with all the drive units, was entirely pre-fabricated and pre-assembled at Rudolstädter Stahlbau in Rudolstadt (Thuringia) back in the summer of 2002.

The entire steel structure remained in storage – dismantled again – for one year on the factory premises of our Nuremberg hot-dip galvanising plant, since the approval phase for building the observatory took longer than anticipated. In the spring of 2003, the time finally came. The structure, which had already started to rust badly, was completely re-measured by the engineers at Rudolstädter Stahlbau.

Following its successful hot-dip galvanising, the structure was transported in mid-July 2003 by land and sea to the foot of the mountain. A road was built specially for task of transporting it with off-road vehicles to the installation site on the mountain.