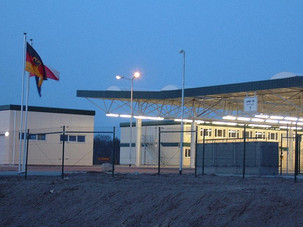 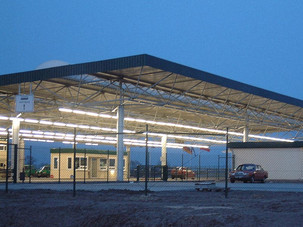 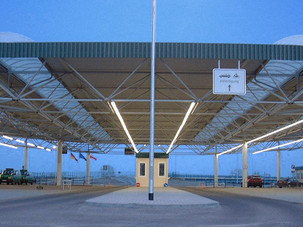 In what was possibly a record-breaking time of just 5 months, a customs house was built at boundary stone 360 and at the end of national highway 112 with a roof almost the size of a sports field, under which the border formalities can now be comfortably completed. However, before reaching this stage, everyone involved in the build had to pull off a genuine feat of construction engineering, which included the state planning authority in Cottbus, the Bernd Walter planning office in Forst, the Sulzfeld company Panholz, which planned the building of the lightweight steel construction, manufactured it and finally assembled it on site, the company Korrosionsschutzzentrum Zittau (KSZ), which performed both the hot-dip galvanising and the powder coating.

The wide range of advantages offered by the steel PAN-TEC space framework specially developed by the company Panholz really became apparent in the construction of this building. As a result of two-dimensional load transfer, it is approx. 50 % lighter than conventional steel constructions and 10 times lighter than a concrete construction. The low dead weight is also reflected for example in the low foundation costs. Short assembly times on site in addition to being fully reusable for future purposes are convincing features of this roofing system and make it cost-effective.

To provide the steel with long-lasting protection against corrosion, it was hot-dip galvanised at Korrosionsschutzzentrum Zittau, a company within the WIEGEL corporate group, where also a decorative powder coating in RAL 7035 (light grey) was applied on 928 m2.

Since the services offered by Korrosionsschutzzentrum Zittau range from hot-dip galvanising to sweep-blasting through to the professional powder coating of components up to a size of 9.00 × 2.80 × 3.00 m (length × width × height), the duplex system was supplied entirely from a single source.

After four gigantic construction cranes had lifted the 60 ton steel space framework including the finished electrical installations and lights at 24 lifting points to a height of 5 m, they placed it down accurately to the last millimetre on 12 supports firmly anchored in the ground. For the cranes, it was necessary to build a special access and loading ramp, because the permit for the heavy crane convoy took too long to come from the Polish side in order to approach the construction site via a bridge from Polish territory.

It is now standing in place – ready for use – the border checkpoint building in Forst. With this, the location of Forst moves a step closer to the centre of Europe and there will soon be one bottleneck less in the German-Polish border traffic.